So apparently this has become a trending topic in transportation circles. Several departments of transportation are publicly pushing a discussion on the issue, and we're seeing the topic pop up in social media feeds and on the news itself.

It's the "Zipper Merge".
The idea is simple: when approaching a merge situation on a road or highway - that is, when two lanes move down to one - the merge should take place as near to the merge point as can be done. Doing so can improve traffic flow and safety.

However, folks aren't doing it for a number of reasons. With this in mind, we wanted to take a moment to address the issues surrounding the Zipper Merge.

I don't like waiting to change lanes until the last minute 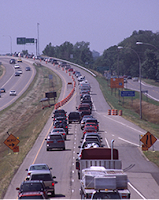 The feeling of trepidation over merging safely and appropriately are very real in heavy traffic situations. If you're moving at any sort of speed - be it 40 miles per hour or 70 - you don't want to make that merge at the last minute, risking the chance someone in the lane you're moving to is stubbornly unwilling to allow you the chance to get in. We get it - we're all about safety here.
The Zipper is most effective during heavy traffic, so you won't likely use this if you're moving at 70 miles per hour. So don't worry about this issue if you're cruising. Just continue about your business.
If you're moving through traffic, we'd hope you're using your signal every chance to get. We're also hoping you're following Texas law by using those turn signals at least 100 feet before you make your move (you can use your signal further than 100 feet away from your move, though). This should let others know of your intent.
Frankly, the hesitation to merge at the end stems from the assumption it's every driver for themselves out there. That's not the way we should be driving! If everyone uses the Zipper, this trepidation shouldn't even exist. In order to get there, we need to agree collectively to use the Zipper.

I don't want to be rude
The only reason this is even a thing is because of all the folks who are doing it wrong. This includes the folks that move over at the first sign of a need to merge - sometimes more than a mile in advance - and get irritated at those who use the lane that's left vacant.
Here's the thing: we have standards telling us how to set up those orange barrels. If we didn't want you using a lane, we'd put those orange barrels in it. If there are no orange barrels in a lane, it's because we want folks to use that lane.
Because of folks who merge early and get frustrated, road rage becomes a major factor here. Unfortunately it's misdirected and, in most cases, the individuals getting frustrated are the ones truly at fault. Heck, one poor guy posted a video to YouTube shaming folks, when he was the one in the wrong (disclaimer: strong language in the linked video ... viewer discretion advised).
The bottom line: it's not rude to use that open lane, it's actually the way things are supposed to work.

Does it really move traffic faster? 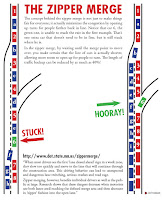 In a word: yes. A 2008 study by the Minnesota DOT says the reduction in traffic backup is 40-50 percent. You read that right: by using the Zipper, you're cutting traffic in half. By the way, they also observed a safer merge and less road rage up there. Those friendly Minnesotans also discovered the Zipper put an end to the frustrations of folks trying to get to exit ramps or turnoffs blocked by that really long backup filled by early mergers.
Minnesota isn't alone. In 2014 the Washington State DOT promoted the Zipper, and the conversation started rolling. The popular tech publication Ars Technica did a piece on the issue that same year.
Some are calling the Zipper, or late merge, a "new" concept, but the reality is it's been employed across the globe for some time. Some countries - like Germany and Austria - require it by law.

Here are what others across the country are saying:
Posted by TxDOTSanAntonio at 4:45 PM
Email ThisBlogThis!Share to TwitterShare to FacebookShare to Pinterest
Newer Post Older Post Home