Posted by TxDOTSanAntonio at 5:30 PM
Email ThisBlogThis!Share to TwitterShare to FacebookShare to Pinterest

The project doubles the total number of lanes from two to four (two in each direction) with a raised median and sidewalk and bicycle accommodations.

Well, the challenge is definitely manifesting itself and forcing us to make significant changes to the original plans. For example, the gasline under the roadway at the intersection of Hausman and Bandera has proven to be quite difficult. 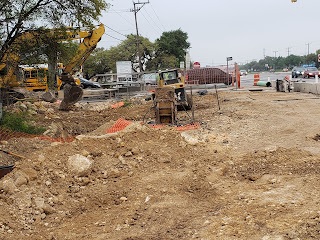 The contractor also encountered elevation conflicts at the sanitary sewer connections under the designated right-turn lane from Hausman to Bandera, forcing a temporary halt to work there and leading to the necessary slope redesign in order to maintain appropriate flow velocity.

We know full well that it's that dedicated right-turn lane that has created a lot of public interest, since with the already narrow roadway, having to take that turn lane away leads to significant traffic congestion during peak times. Initially, our contractor had requested to keep the lane closed until today, hoping to have had enough time to get sufficient work done and be able to reopen it. Unfortunately, that has not proven to be the case and the reopen has now been pushed back to Monday, May 20.

We know that is not what most of you wanted to hear. However, the extra pain for about two more months will hopefully prove to be more than worth it. The original construction plans had the right-turn lane closed for the entire duration of the project, which is estimated to be completed in early 2023 (the first phase involving utility work takes about 18 months). 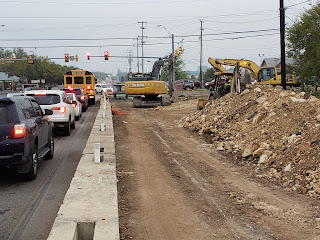 Considering the public impact of such a lengthy closure, we tasked our contractor with coming up with alternatives minimizing the lane closure time.

Toward that purpose, we scrapped the original plans to the extent possible and instead the contractor will focus on completing all permanent elements (gasline tie-ins, water and sanity sewer adjustments and drainage crossing)  impacting the right-turn lane over the next two months -- as opposed to doing a bit a time for the next three years.

We truly appreciate the public's patience and understanding. But at least two months is definitely better than three years! Assuming all the work can get done in time, drivers should have a dedicated right-turn lane back in place by the end of May.

.
Posted by TxDOTSanAntonio at 2:57 PM
Email ThisBlogThis!Share to TwitterShare to FacebookShare to Pinterest

Posted by TxDOTSanAntonio at 4:50 PM
Email ThisBlogThis!Share to TwitterShare to FacebookShare to Pinterest

What’s With All The I-10 Work On The Far East Side?

For drivers who regularly travel along I-10 in Far East San Antonio and Bexar County toward Seguin, you may have noticed a lot more construction activity going on the last couple of months –  a lot more. This is because there are not one, but two distinct yet overlapping projects – both of which include multiple improvements – currently underway between I-410 and Graytown Road.

This is just the beginning. Two additional construction projects in this area are scheduled to start later this year, all designed to bring you some much-needed safety and mobility improvements on the heavily-traveled I-10 East corridor connecting the San Antonio and Houston metro regions.

So, what exactly is being done in the corridor? Let’s break it down for you:

• Frontage roads are being converted from two-way to one-way operation. These improvements have been underway since 2017 and are anticipated to be complete by 2020. Moving to one-way operation will improve safety on the frontage roads and exit/entrance ramps, minimizing conflicts between vehicles entering and exiting the mainlanes and helping bring the roadway up to current design standards.

• A new overpass is being constructed at Woodlake Parkway. This work started in 2016 and should be complete a little later this year. The new overpass will improve access to eastbound I-10 for the lengthy stretch between Foster Road and FM 1516.

• Various intersection enhancements are being made at Foster Road, FM 1516 and Loop 1604 to improve traffic flow. These improvements are planned to be completed in early 2020.

• Two additional mainlanes (one in each direction) are being added from I-410 to Loop 1604, which will widen the roadway from four to six lanes. In addition, the existing mainlanes are being reconstructed to bring the highway up to current design standards and address deteriorating pavement conditions. Together, these improvements will increase mobility and safety on the mainlanes. They have been in progress since Fall 2018 and are anticipated to be completed in 2022.

• Later this year, work is scheduled to begin on a similar I-10 East mainlane widening and reconstruction project from Loop 1604 to Graytown Road, which will also include ramp improvements.

• A project to widen Loop 1604 from two to four lanes from I-10 East south to Martinez Creek is also planned to begin later this year, which will require some work in the current I-10 East construction area.

Whew, that’s a lot of work in one area at the same time, we get it!

While we are thankful to have the resources to help address the ever-growing transportation needs in this area, we understand that so much construction can be inconvenient and downright frustrating at times for drivers.

All these activities have and will at some point require lane, ramp, and intersection closures, which can involve detours and/or cause backups. Luckily, most of the major work is planned to take place overnight and on weekends to reduce weekday traffic disruptions as much as possible.

To minimize any potential impacts of construction on your daily activities, we post all upcoming scheduled closures on this blog site every Friday afternoon to help you plan your trips the following week. We also post real-time construction and closure information –  including any major incidents –  on digital message signs along the corridor, as well as on the San Antonio District Twitter feed. In addition, we have updated our I-10 East Corridor project website to help you keep up with all the current and upcoming construction activities in the area.

Thanks for your ongoing patience as we work to make I-10 a safer, less congested roadway for residents, businesses, commuters and other travelers in this area.
Posted by TxDOTSanAntonio at 3:20 PM
Email ThisBlogThis!Share to TwitterShare to FacebookShare to Pinterest

Posted by TxDOTSanAntonio at 5:06 PM
Email ThisBlogThis!Share to TwitterShare to FacebookShare to Pinterest

Posted by TxDOTSanAntonio at 5:16 PM
Email ThisBlogThis!Share to TwitterShare to FacebookShare to Pinterest