Posted by TxDOTSanAntonio at 5:21 PM
Email ThisBlogThis!Share to TwitterShare to FacebookShare to Pinterest

A Turn For The Better: Opening Of New Permanent Turnarounds On US 281 Expansion Project

As our work on the US 281 Expansion Project progresses, we're starting to do away with some temporary measures as we open up some final configuration features.

For example, we recently opened up the new permanent turnaround at Redland Road (while we also opened up one lane on the new bypass there). 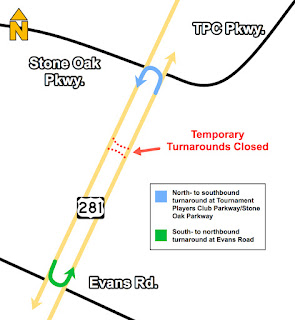 Next up: The opening of two new additional permanent turnarounds on Monday (March 2) in this corridor.

Southbound drivers will be able to access to the southbound-to-northbound turnaround at Evans Road.

The new turnarounds are aimed to improve the flow of traffic and help drivers easily change directions.

As we open the permanent turnarounds, we will close the temporary turnarounds (in both directions) south of Encino Commons Boulevard.

As always, this planned move is weather permitting and subject to change.

You can stay informed of lane closures by receiving email alerts by signing up here: http://eepurl.com/cXz2kr.
Posted by TxDOTSanAntonio at 5:04 PM
Email ThisBlogThis!Share to TwitterShare to FacebookShare to Pinterest

Ramping It Up: New Exit To Bulverde Road On Loop 1604

Important developments on one our projects on Loop 1604! 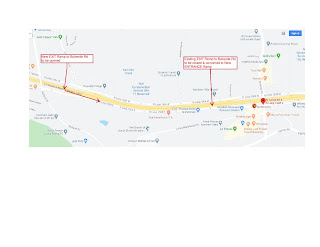 As any of y'all that frequently drive Loop 1604 in the North Central/Northeast San Antonio area likely have seen, one of our contractors has been working on a ramp reversal project between Bulverde Road and Redland Road.

We're making good progress on this project, which entails a total of four ramps (two on the eastbound side and two in the westbound direction).

Tonight (Wednesday 2/26) following barrier resetting work overnight, there will be a new eastbound exit ramp to Bulverde Road opening up to the traveling public.

At the same time, the current exit ramp closer to Bulverde will be closing so work can begin on converting it to a new entrance ramp.

Still remaining on this project are a new westbound exit ramp (underway) as well as a new eastbound entrance ramp. Lastly, there will be a mill and overlay (cutting out the top layer and laying on a new top) of the Loop 1604 mainlanes between Redland Road and Green Mountain Road (an adjacent but separate project is doing the same work between Green Mountain Road and I-35).

The main reason behind this ramp reversal project is to alleviate traffic congestion as well as in preparation for the new configuration under the future Loop 1604 expansion project, which will ultimately upgrade the highway all across the North side from SH 16 (Bandera Road) to I-35. That project is expected to begin construction next year.

Posted by TxDOTSanAntonio at 11:30 AM
Email ThisBlogThis!Share to TwitterShare to FacebookShare to Pinterest

Next Up On I-10 In Far East San Antonio: Frontage Road Conversion & New Underpass

For those who have lived in Texas for a while, you may remember a time when two-way frontage roads were the norm along major highways throughout the state, including right here in the San Antonio region.

If you’re really into transportation like we are, you also may have noticed our steady transition away from that original two-way design to one-way frontage road access, particularly in urban areas.

One-way frontage roads improve mobility and safety by keeping traffic flowing in the same direction and removing potential conflict points at entrance and exit ramps and at intersections with cross-streets.

A local example of the transition to one-way frontage roads can be seen in action along I-10 on San Antonio’s Far East side: In 2017, our contractor Texas Sterling began converting frontage roads from two-way to one-way access between Foster Road and Graytown Road as part of a larger corridor-wide effort to widen and reconstruct I-10 from Loop 410 to the Bexar/Guadalupe County line (and ultimately, overall improvements on I-10 between San Antonio and Houston).

Although the I-10 frontage roads west of Graytown Road have been operating with one-way traffic for a while now, things are just getting started on the next section of I-10 to the east of Graytown.

On Monday, March 2, contractor Jordan Foster will begin conversion of the I-10 frontage roads between Graytown Road and Pfeil Road. This work will include the addition of a new temporary eastbound entrance ramp just east of Graytown and a new temporary westbound exit ramp to Graytown, set to open by April.

Here’s what you can expect to see in this area beginning the first week of March: 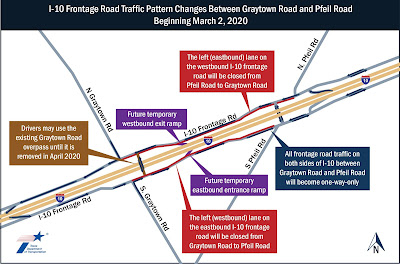 It is important to note that while left-lane closures will only be required temporarily for construction of frontage road and bridge improvements, the one-way frontage road traffic pattern will be permanent.

Once the left lanes reopen, they will carry traffic heading in the same direction as the right frontage road lanes.

Also, just as a heads-up for those who initially plan to use the Graytown overpass as a detour: As mentioned above, crews are planning to remove, reconfigure and relocate this bridge as part of mainlane improvements in this area.

Demolition of the existing Graytown bridge (see below, right) is currently anticipated for April 2020. Westbound I-10 drivers wishing to access Graytown Road south of I-10 may take the Pfeil Road exit and travel south on Pfeil Road or continue to the Loop 1604 turnaround.

The existing Graytown overpass will ultimately be relocated and rebuilt as an underpass that seamlessly aligns with the eastbound and westbound I-10 frontage road intersections at Graytown Road. We will provide more details on this blog site as they are confirmed. 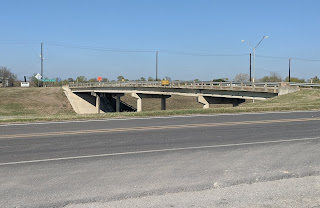 For more information, visit our website for I-10 East from I-410 to the Bexar/Guadalupe County Line.

You may also join our email list to receive updates on major changes and progress on the I-10 improvement projects as well as follow our Twitter feed @TxDOTSanAntonio for up-to-the-minute updates and developments.
Posted by TxDOTSanAntonio at 5:28 PM
Email ThisBlogThis!Share to TwitterShare to FacebookShare to Pinterest

Posted by TxDOTSanAntonio at 4:01 PM
Email ThisBlogThis!Share to TwitterShare to FacebookShare to Pinterest

Posted by TxDOTSanAntonio at 4:38 PM
Email ThisBlogThis!Share to TwitterShare to FacebookShare to Pinterest

Posted by TxDOTSanAntonio at 2:51 PM
Email ThisBlogThis!Share to TwitterShare to FacebookShare to Pinterest

The Wait Is Over: Ackerman Ramp on I-10 In Far East San Antonio Set To Reopen


A shout-out to drivers and businesses along I-10 in Far East San Antonio who have gracefully endured the months-long closure of the eastbound exit ramp to Ackerman Road. Now, a light at the end of the tunnel: A new and improved ramp is set to open next week. 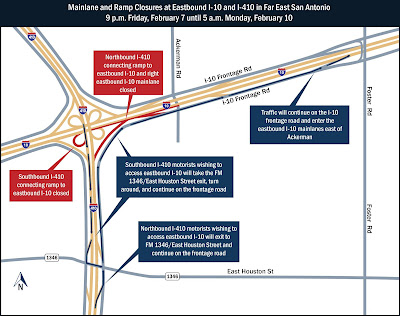 The existing exit ramp to Ackerman Road has been closed since late June 2019, when our contractor on the I-10 mainlane expansion project between I-410 and Loop 1604 switched eastbound traffic to the median area between W.W. White Boulevard and Rosillo Creek. This switch was necessary to allow crews to begin reconstructing the outside eastbound mainlanes and shoulder.

Last summer’s traffic switch required adding a temporary connection from the northbound I-410 exit ramp to the newly constructed pavement in the I-10 median area to accommodate .higher volumes of traffic heading from northbound I-410 to eastbound I-10. This in turn required a long-term closure of the existing I-10 exit ramp to Ackerman Road to avoid conflicts between cars entering and exiting the mainlanes in this area.

Final preparations for the ramp opening will take place this weekend. This work will require closures of the right eastbound mainlane from I-410 to Ackerman Road, as well as closures of the northbound and southbound I-410 ramps connecting to eastbound I-10 from 9 p.m. Friday, February 7 to 5 a.m. Monday, February 10.

The existing eastbound I-10 detours to Ackerman Road will remain in place until the new ramp is opened. Eastbound I-10 drivers wishing to access Ackerman have two options:
For more information, visit our website for I-10 East from I-410 to the Bexar/Guadalupe County Line. You may also join our email list to receive updates on major changes and progress on the I-10 improvement projects as well as follow our Twitter feed @TxDOTSanAntonio for up-to-the-minute updates and developments.
Posted by TxDOTSanAntonio at 2:27 PM
Email ThisBlogThis!Share to TwitterShare to FacebookShare to Pinterest
Newer Posts Older Posts Home
Subscribe to: Posts (Atom)