Posted by TxDOTSanAntonio at 4:48 PM
Email ThisBlogThis!Share to TwitterShare to FacebookShare to Pinterest

Posted by TxDOTSanAntonio at 5:22 PM
Email ThisBlogThis!Share to TwitterShare to FacebookShare to Pinterest

For our peeps on San Antonio's West Side, listen up, this one's for you!

There will be quite a bit of construction activity taking place this weekend on the I-410/US 90 interchange project.

A third frontage road lane will also open up for the exit and entrance ramps. Traffic will be detoured to the frontage road. The new configuration will be open to traffic tomorrow (Saturday 8/24) at 5 a.m.

Later that same day (Saturday) starting at 8 p.m. and running through Monday (8/26) morning at 5 a.m. all southbound mainlanes between the Lakeside exit ramp to the US 90 bridge will be closed to prepare for a traffic switch and to open up the new Marbach Road entrance ramp.


A look ahead
We are gradually approaching the last phase of this project (yay!) that is expected to be completed in 2020. We know, we know, that should prompt a round of applause for everyone!

But we're not quite there yet. We still have work at Marbach Road that includes demolishing the middle section of the current bridge.

Weather permitting, we are planning for the bridge to be demolished the weekend after Labor Day. Stay tuned here and on our social media channel for further updates on this project!
Posted by TxDOTSanAntonio at 12:34 PM
Email ThisBlogThis!Share to TwitterShare to FacebookShare to Pinterest 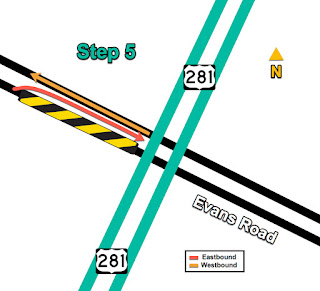 Important step taking place this weekend on the US 281 Phase I Expansion project!

We've been working on the reconstruction of Evans Road a bit a time. This weekend, our contractor (Webber) will be putting in place  traffic switch on the westbound side of the Evans & 281 intersection (see adjacent illustration).

As a result, both westbound and eastbound will be reduced to one lane in both directions at the 281 intersection.

The switch will start this Friday, August 23, at 9 p.m. and will be in place for the weekend, until  5 a.m. Monday, August 26. The goal is to have Evans fully reopened with two lanes in each direction by the Monday morning commute.

Intersection reconstruction can require multiple changes in traffic flow/configuration to ensure construction can be completed smoothly and -- most importantly -- safely for drivers and crews. We appreciate your patience during this switch.

As always, we remind you that any scheduled work is subject to change due to weather and other factors that could prompt a delay.

Posted by TxDOTSanAntonio at 4:31 PM
Email ThisBlogThis!Share to TwitterShare to FacebookShare to Pinterest

Lots and lots of work going on in Boerne, we know!

As part of our project on I-10 improvements between Scenic Loop Road and SH 46, our contractor has begun working on the retaining wall at the I-10 & SH 46 intersection.

You may have noticed this has had an impact on the existing SH 46 bridge/overpass over I-10.
itself. In order to safely conduct this retaining wall work, the contractor was required to remove the northbound SH 46 right lane, which in turn forced to take away the dedicated left-turn lane to get on the I-10 westbound frontage road (see map above).

So the one open lane is being used both for left turns as well as for through-traffic continuing on SH 46 past I-10. The traffic light has been adjusted to reflect this traffic flow change. As you may expect, this necessary move will cause delays, as drivers waiting to go straight through will have to wait until those making the left turn clear out (these in turn have to yield to southbound SH 46 traffic coming the other way).
Posted by TxDOTSanAntonio at 3:50 PM
Email ThisBlogThis!Share to TwitterShare to FacebookShare to Pinterest

We hope you're enjoying the return of the dedicated right-turn lane from Hausman to Bandera. As part of continuing construction, the contractor will need to close the dedicated left- turn lane from Bandera to Hausman for approximately week starting Monday (August 19).

Don't worry, though! Drivers will still be able to make that left turn, keeping the protected left-turn traffic signal arrow. But for this week of work, the same lane will be used for going left as well as for those looking to continue straight across Bandera (see graphic below). 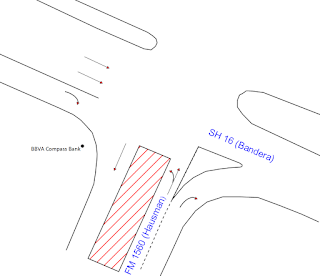 Rest assured that the contractor has taken every step to make this work as efficient and safe as possible.

We believe it is in the best interest of the public to close, pave and open this lane now before the Northside Independent School District starts classes on August 26.

Kuentz Elementary and Sandra Day O’Connor High School are just beyond this intersection and there would undoubtedly be long back-ups at drop-off and pick-up times if we were to wait and complete the work later as the original plans called.

That's why, just as we did with the dedicated right-turn lane issue (closure was originally supposed be permanent for the entire duration of the project) we're doing our best to prioritize mobility and minimize disruption. So we're changing the plan by moving up this work, the goal being to do our best to complete this phase before classes start.

It probably doesn't feel like it to everyday commuters on Hausman, but this extremely complex projects (lots and lots of utility work underground must be worked out before major construction begins) is actually ahead of schedule.

That said, we do want folks out there to expect delays during peak hours during this period of about one week while the dedicated left-turn lane is closed, particularly on southbound Hausman.

As always, we appreciate everyone’s patience as our contractor continues to make significant progress and addresses necessary construction phases.
Posted by TxDOTSanAntonio at 5:10 PM
Email ThisBlogThis!Share to TwitterShare to FacebookShare to Pinterest

Posted by TxDOTSanAntonio at 4:28 PM
Email ThisBlogThis!Share to TwitterShare to FacebookShare to Pinterest

Posted by TxDOTSanAntonio at 1:54 PM
Email ThisBlogThis!Share to TwitterShare to FacebookShare to Pinterest

Our contractor working on the I-10 improvement project in Boerne from SH 46 to Cascade Caverns/Scenic Loop is progressing into the next phase of construction.

During this new phase, contractor Texas Sterling will be enhancing the westbound I-10 frontage road and Business US 87 bridge, prompting necessary traffic closures and detours August 15-18, (weather permitting). These closures are required for safety to divert traffic away from construction work.

The westbound I-10 mainlanes between Parkway and Crosspoint will be closed and I-10 traffic will be diverted to the temporary pavement in the median.

In addition, the westbound Business US 87 Exit 542 Ramp into Boerne will be permanently closed. Westbound drivers seeking to access US 87 should:

2) Take Scenic Loop (Exit 543) to the westbound frontage road and merge onto existing US 87.

What is being constructed:
What to expect:

Drivers should expect slower travel times and increased traffic flows along the existing westbound frontage road and the SH 46 intersection during this phase of construction. We appreciate everyone’s patience as our contractors continue to make significant progress on this I-10 improvement project.
Posted by TxDOTSanAntonio at 10:59 AM
Email ThisBlogThis!Share to TwitterShare to FacebookShare to Pinterest

Hopefully this one will go as smoothly as the first!

Folks in Boerne likely encountered the first part of the closure/traffic switch being implemented on SH 46 in town with the objective of reconstructing major intersections to fit the future expanded roadway.

Last week, our contractor put in place the closure/switch at SH 46 and Charger Boulevard. It was originally estimated to take 11 days but the contractor worked 24 hours a day and completed the reconstruction in just two days! Nice!

Now they move on to the second phase of the closure/switch process, next up are the intersections of SH 46 at Herff Ranch Boulevard and at Esperanza Boulevard (see graphic). As they did at Charger, it will be necessary to close the turn lanes at both intersections.

Once again, one lane of travel per direction will be provided through the intersections and off-duty law enforcement officers will be on site helping direct traffic for the duration to minimize delays to the traveling public.

The construction is scheduled to begin Tuesday, August 6th, and is projected to last approximately 11 days (same as the estimated time with the previous phase at Charger).

The contractor will be using this lane closure/traffic switch to repave the next section of SH 46, between Brentwood Drive and Ammann Road.

The contractor has taken every step to make this phase of construction as efficient as possible,and will once again have crews working 24 hours a day to accelerate its completion (hopefully, again, ahead of the estimated completion date).

During this phase of construction, eastbound traffic will remain in its current place while westbound drivers will be shifted to the northern edge of the road, creating a work zone in the middle of SH 46 (see graphic above).

If you frequently use SH 46, you've likely already seen electronic message signs placed along the work zone by the contractor to help alert you to this coming work.

As always, for everyone's safety, we remind drivers about the "Move Over/Slow Down" state law which requires to move over if you can or at least slow down in construction zones.

Posted by TxDOTSanAntonio at 4:53 PM
Email ThisBlogThis!Share to TwitterShare to FacebookShare to Pinterest