Posted by TxDOTSanAntonio at 5:26 PM
Email ThisBlogThis!Share to TwitterShare to FacebookShare to Pinterest

Ready, San Antonio?
We appreciate your patience and understanding with the construction project at the intersection of Loop 1604 and SH 16 (Bandera Road).
We're talking about the new Displaced Left Turn (DLT) configuration at this very busy intersection, which at last count had an average daily traffic count of approximately 40,000 cars on Bandera and around 120,000 on Loop 1604.
It's a first-of-its-kind intersection for the TxDOT San Antonio District. For some of you who travel between the Alamo City and Austin, you may have already encountered this type of design at I-35 and SH 80/E. Hopkins St. in San Marcos.
Just as a quick reminder, this type of configuration offers drivers traveling up and down Bandera dedicated left-turn lanes (with their own traffic lights) to directly get on Loop 1604 frontage roads. That means that drivers on Bandera not needing to get on Loop 1604 will be able to continue straight through the intersection without having to stop. It also means there will no longer be left turns under the overpass from Bandera to Loop 1604.
Click here for a video simulation of what the DLT traffic flow looks like.
Our plan is to open the DLT over the course of this weekend, April 26-28. Given that some work still needs to be done (particularly syncing more than a dozen new traffic lights with the existing signal system), the intersection will be fully closed starting at 11 p.m. Friday with only right turns allowed in all directions on both roadways.
Crews will work all night long and, depending on the pace of progress, at some point on Saturday the frontage roads on Loop 1604 will be opened up to drivers -- but they will not be able to turn left to Bandera, which will remain closed in both directions (refer to detailed detour maps below).
The goal is to have the intersection fully opened up early Sunday morning, but that will depend on whether any unexpected issues/delays come up.
There will be off-duty police officers at various points all around the intersection helping direct traffic and, for the beginning of the full opening, officers will help guide drivers by leading them through the correct movements.
For a visual explanation of the intersection opening process, click here for a video livestream we conducted with our project staff.
Given the protocol we need to follow in order to have an orderly and safe opening of the new intersection, we are encouraging folks, if at all possible, to avoid the area over the weekend so they don't get stuck in traffic backups.
If you can't avoid it, again, do expect major delays. Here are the detour maps: 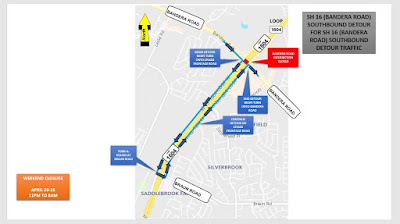 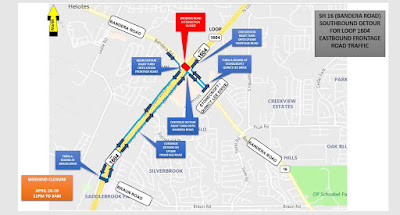 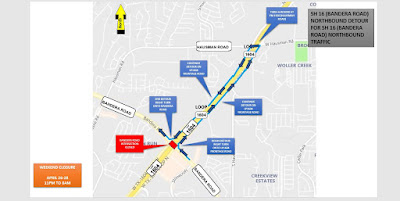 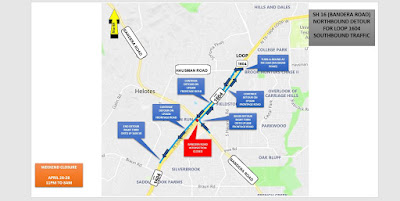 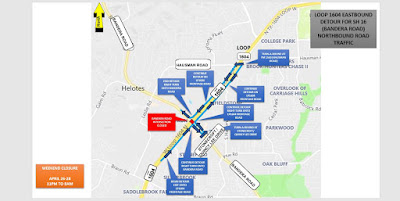 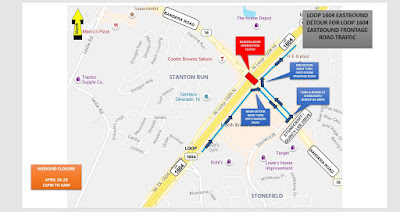 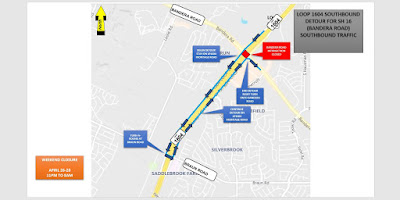 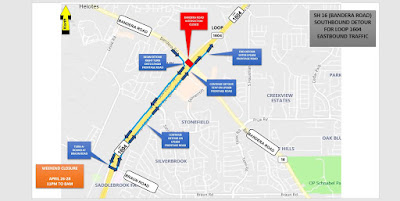 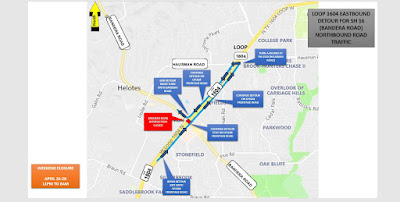 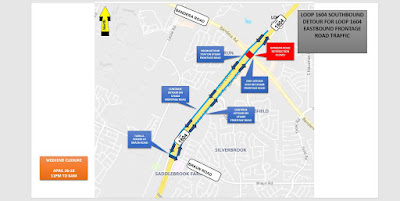 Posted by TxDOTSanAntonio at 10:27 AM
Email ThisBlogThis!Share to TwitterShare to FacebookShare to Pinterest

Posted by TxDOTSanAntonio at 2:42 PM
Email ThisBlogThis!Share to TwitterShare to FacebookShare to Pinterest

Posted by TxDOTSanAntonio at 4:04 PM
Email ThisBlogThis!Share to TwitterShare to FacebookShare to Pinterest

As we've previously described in detail in our blog, there's quite a bit of construction activity taking place on I-10 in Far East San Antonio (two projects), part of a larger effort to improve and enhance I-10 out further to Guadalupe County and eventually all the way to Houston.

One of those two ongoing projects started in Fall 2016 and is expected to wrap by the end of this year. Improvements include: New bridge at Woodlake Parkway, intersection upgrades, new signals, reconfiguration of entrance/exit ramps and conversion of the frontage roads from two-way to one-way traffic.

Now that project is hitting an important milestone. This Saturday, April 13,  our contractor Texas Sterling Construction will switch I-10 eastbound traffic to the new mainlanes between Foster Road and FM 1516 (see map).

Before the switch happens, there will be alternating lane closures from 6 a.m. to 3 p.m that day. Traffic will be switched to the newly constructed main lanes immediately upon completion of work in the afternoon. 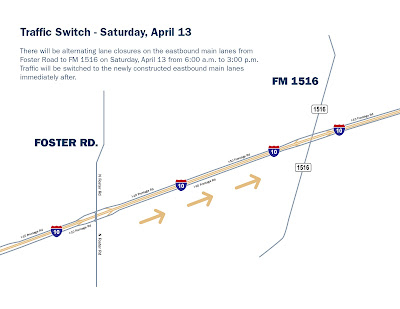 Please note that the switch taking effect means detours currently in place will be removed to allow drivers to transition onto the new mainlanes (which feature 12-foot lanes and 10-foot shoulders) in the afternoon.

You might be asking: What about the westbound mainlanes? A traffic switch for the westbound mainlanes is scheduled for later this month, essentially repeating this process only that it will take place on the other side of the highway.
Posted by TxDOTSanAntonio at 2:22 PM
Email ThisBlogThis!Share to TwitterShare to FacebookShare to Pinterest

Tomorrow (Tuesday, April 9) morning after rush  hour, crews will open the new two southbound lanes on Loop 337 to drivers for roughly a one-mile stretch running from River Road to SH 46.

Once these have opened for this long-term traffic switch, crews will begin work on the existing lanes, with one northbound lane remaining open to traffic (see maps below for to get a better visual sense). 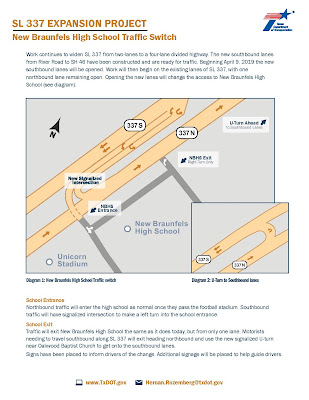 To access New Braunfels High School, southbound traffic will have a signalized intersection to make a left turn into the school entrance.

To access Oakwood Baptist Church, northbound traffic will use a new signalized U-turn north of the church to head southbound on Loop 337.

Road signs have been placed to direct drivers through the new roadway configuration.

We ask the traveling public to adhere to construction signage and remain aware when traveling through the work zone. 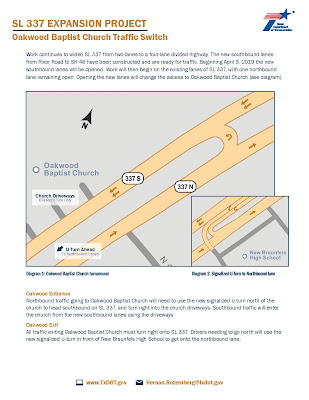 As always, weather may impact the timing of these closures. We appreciate your patience and understanding as crews work to improve safety and mobility in the area.

Construction for the Loop 337 Expansion project began in November 2017 and is anticipated to be completed in late 2021.

The construction project is about six miles long, from I-35 to Hillcrest Drive, and includes an upgrade to a 4-lane divided roadway with pedestrian accommodations and new bridges in various locations.

Posted by TxDOTSanAntonio at 11:41 AM
Email ThisBlogThis!Share to TwitterShare to FacebookShare to Pinterest