- Jaime
The short answer to your question ... is no, we can't make that left through lane an optional left/through lane. 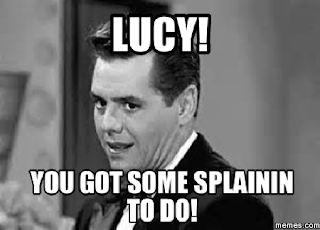 But we're not always about brevity here. We like to explain things, and you're here because you want to hear (ahem, read) what we have to say. Right?
The biggest reason for not going with the optional left-through lane (which do exist on Wiseman and on Potranco, by the way) is signal phasing. There's a whole manual for this (which you can read, if you want). These intersections are currently five-phase intersections, meaning the signals change five times each cycle. It works to maximize the flow of traffic in all directions. The five phases are:
The cross streets have that optional left-turn lane ... the major street does not. That's by design! If we were to add the optional lanes to Loop 1604, we'd have some issues and you'd actually see greater delays. Here's why:
By doing this you're lacking the major traffic movement with this arrangement - that extra phase of traffic where the through traffic is allowed to flow through the intersection. Sure, by just looking at things we'd only have four phases ... but that means you're looking at 20-30 fewer seconds given to that through traffic for each cycle. That traffic would instead simply stack up on queues on the main lanes, bogging down traffic on Lp 1604 even more.
That's why we don't do an optional left-turn lane on any location comparable to Loop 1604 here (think of Loop 337 in New Braunfels or Northwest Military at Wurzbach Parkway).
Here's the good news: you may have noticed we're working on the overpasses at Wiseman, NW Military and Potranco. It'll take some time to get to where those overpasses are in use, but they are your long-term solution. By the way, when we have those overpasses in we'll be able to employ your suggestion and move to a four-phase cycle (which is standard for expressway intersections).


One issue that seems to be ignored is the lack of a good connection for people leaving AR wanting to head north on 1604. The best way now is Wiseman, out the "back" of the area, although it is generally backed up at rush hour.
It appears to me that a simple clover, eastbound just pass the overpass, onto 1604 headed north, would solve the problem. There doesn't appear to be any right-of-way issue, when might this project be put in place?
- Richard
The issue wasn't ignored at all; the current strategy is to route traffic down to Wiseman like you're doing today. When the project was studied and designed the demand (and projected demand) for that move wasn't very high. Remember these plans go back over seven years, so a lot of what you're seeing now wasn't known of during those plans.
Once we were ready for construction, financial constraints kept us from adding more features to the project (and bridge work is really expensive).
The current option will improve dramatically when the overpass at Wiseman is constructed and, as you know, we're working on that now. When that's done (the project is set to wrap up in 2019) we'll take a new look at traffic movements to determine needed improvements in the future.


You posted some information on your blog sometime around October 2015 regarding a lane being eliminated on the frontage roads of the I-410 just north of TX-151 due to construction work. It said that work would be completed around 2017. I know there is still construction work going on around this area, however I would like to know if this lane elimination is still there or if it has been lifted. I have also pasted in the information that was shown on the blog. Thank You.
- Jay
Those frontage road lanes is still eliminated, and we're still working to fill the promise of having that lane reopened this year. That will happen when we've got the new ramps finished - a task on this project that's prioritized right now. The closures are designed to help crews widen the frontage roads and the main lanes, fitting them to new ramp configurations that are being pushed to be in place this summer (if all goes well).


Why is there no plan for an east bound exit for Boerne Stage Road? Everyone going to HEB or Walmart has to sit through the Ralph Fair stop light. I'm not surprised the bridge needed expansion but a lot of that was due to two streets worth of traffic forced to go through the same exit and light.
Could you please let me know why this is the plan?
- Reid
Right now it's really a matter of geometry. You're familiar with the area; you know the on-ramp from Ralph Fair Road (which gets more than its fair share of use) takes up most of the space between Ralph Fair Road and Leon Creek. Yes, there's a big gap between Ralph Fair Road and that on-ramp, but that's filled by the auxiliary lane allowing turnaround traffic to blend with traffic off the bridge - preventing us from moving that entrance ramp anywhere.
Those unfamiliar with what's going on out there can check out our schematic of the area here.
It's a tough situation, for sure - but not one that has been taken lightly by our folks at all. The situation will likely improve for you when we convert that frontage road between Old Fredericksburg Road and Ralph Fair Road to one-way; it'll open up some capacity along the frontage road and improve the signal operations a bunch.


We are new to the area and keep hearing rumors about SH 211 extending to Culebra. I saw something that there is a project out there that has been on and off for years. Is there anything in the future for this effort?
- Matthew
This is a discussion that's been had by the Alamo Area MPO, Bexar County and us quite a bit over the last several years. The effort is currently in the hands of Bexar County. They have information posted online here.


Bitters Road between Blanco and 281 is down to two lanes and it is a nightmare for traffic, particularly for parents and school buses who have to use Bitters to reach Hidden Forest Elementary. I have not seen any public notice about the scope of this project, although there has been intermittent resurfacing on parts of the road. What's going on right now and how long is it going to take?
- Haley
Haley wrote this in a few weeks ago. The work to which she referred was being done by the city of San Antonio.
Y'all, we know it can be confusing regarding who is in charge of what road. Heck, we get it wrong from time to time. A good rule of thumb: if it has an FM (Farm-to-Market) road designation, it's a TxDOT road. These designations feature the big white boxes with black numbers you'll see on the large green directional signs when you're running down the Interstate highways. If it doesn't have that designation, it's not ours.
If it's not ours and it's in the city limits, it belongs to the city of San Antonio. If it's beyond city limits, it goes to Bexar County Public Works.
It's tough to keep straight for us all, but we try to manage. We have cheat sheets that help, too!
All that said, the city had responded to others asking similar questions and should have had the issue resolved a while ago.


So since the new on ramp has opened on 1604 and Bandera headed west, I've seen many, many people leave the Stonefield Place street and interrupt traffic to get on the highway. The street is passed the entrance ramp so they have to drive up and cross over the 3 lanes to get on. I've seen people almost get hit several times in the last week alone. Any way something could be done to alleviate this?
- Leah
Unfortunately there aren't a lot of options to deal effectively with these very rude, very selfish, very dangerous drivers. And that's what they are - rude, selfish and dangerous. They are putting their own wants ahead of the safety of all of us on the road, aren't they?
Sadly, Leah, this is a driving behavior displayed all over the city. What's more, it's not even against the law (as Texas Highwayman points out) in Texas, though it is elsewhere. Here it's just an obnoxious lane change. Just because it's not illegal doesn't mean it's the right thing to do, though, and this sort of mentality has simply got to be eradicated. At this location specifically, going through that signal at Bandera only takes a few extra minutes and could extend life expectancy of they motorist by years. Decades, even. That's a heck of a return-on-investment!

We design and build the roads and include with our building a set of instructions (pavement markings, highway signs...). When those instructions are not followed, the results are almost always disastrous.
Update: Looking at this location a second time based on feedback from Texas Highwayman, we need to point out this movement is, in fact, an illegal movement. Coming out of Stonefield to get to the entrance ramp to northbound/eastbound Loop 1604 means crossing the "gore", which is absolutely illegal. And unsafe. And selfish. And reckless. And everything we mentioned above.
We can try to install some sort of barrier to stop this - like the Tuff Curb and delineator paddles we're planning to put in on Alamo Ranch Parkway near Westwood Loop, but this shouldn't be a necessary strategy.
Let us be clear: this reckless, dangerous, selfish, childish, rushed and illegal driving behavior exists all over San Antonio. We stripe the roadway to let folks know this is unacceptable, but are criticized because drivers completely ignore the striping. This leads to pressure to put up these positive barriers - which we can absolutely do, when needed - at a higher cost to you, the taxpayer, and at an absurd cost to repair, replace and maintain as we go. To see what we mean, take a look at US 281 north of Loop 1604, where we've installed these curbs and paddles to stop selfish and disrespectful drivers from doing the same thing up there. We've had to replace those paddles routinely, as drivers ignore them and figure the damage to their own car is minimal, so they simply drive over them.
Installing a small concrete curb isn't an option, either - those are only to be used on roads with posted practical speeds under 45 miles per hour. The frontage road here is now posted at 50, and drivers are often exceeding that posted limit.
This gets us to the point of actual solutions for you, Leah. Option one: tell your neighbors to stop being so dang selfish, rude, dangerous, reckless, careless and more. Option two: encourage your local law enforcement agencies to up the enforcement on this maneuver, writing tickets for those who do it.
In the interim, we'll pass along some comments on this issue to our engineers for a fix.


Any idea when construction to widen Loop 1604 from I-10 to FM 1346 might begin? Thanks!
- Todd
Right now that's included in our long-range wish list and is penciled in for the year 2020. To be honest, that mark will likely move - it's placed on the list for the year 2020 so it's considered and scored for prioritization. We are working on it, but at the moment we have other demands to fill.