The latest on the I-10 work around Fair Oaks Ranch

Well, that old Fair Oaks Parkway bridge sure came down quick. Our engineer on site was as surprised as we were in the communication department at how quickly RELMCo's subcontractor, JR Ramon, got the bridge broken apart and cleaned up. We love being pleasantly surprised as much as anyone, and we like to give the credit when it's due. In this case accolades have absolutely been earned. We were convinced that work would require at least 48 hours to finish; JR Ramon had it all wrapped up in about 21 hours.
How'd they do it? In a word: resources. Ramon simply put everything they had into this one weekend and were able to give their guys at least a partial weekend as a result. They had a pre-designed activity plan and followed it.
A little luck didn't hurt, either; they didn't have any equipment break down and the weather was perfect for the work.
When stars align work gets done fast! 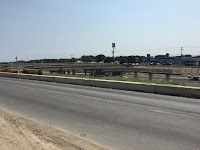 Now the old bridge is down RELMCo will focus on building the new bridge. The new one will be five lanes wide (old one was two) and directly connect Tarpon Drive to Fair Oaks Parkway - no more weird intersection on the eastbound side of I-10 anymore. We expect the final product to be ready for traffic mid-2018, so the current traffic situation will remain for a while.
We won't have any major closures until we're ready to set bridge support beams. That work will require another weekend closure we will work hard to broadcast when the time comes. Overnight closures will be used to place bridge deck panels and pour concrete; those closures shouldn't mean weekend-long interruptions and we'll do our best to avoid the big stuff as much as we can.

We opened up the new overpass at Old Fredericksburg Road for traffic back in July and traffic seems to move along the road just fine. We're reaching that point of the project where anything we'd have to say for the next few months would be redundant, so we won't really have a whole lot to say about this project until the start of 2019.
Sundt is really focusing on the intersection of Old Fred under the new overpasses, which needs to open before we can convert the frontage roads to one-way between Ralph Fair Road and Old Fredericksburg. The segment between Old Fred and Fair Oaks will convert to one-way once the new bridge over Fair Oaks is finished. 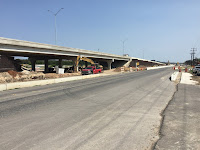 Until that happens we'll continue to have crews doing the basic concrete work on curbs, sidewalks and barriers. More intense work you see will be focused on the new ramps - we're building eight all told, so traffic will have entrance and exit ramps in both directions between Ralph Fair and Old Fred as well as between Old Fred and Fair Oaks.
That work between the main lanes and frontage roads around the new overpass is intended to make sure the old embankments are cut to fit the new road just right. We're also finishing up some retaining walls - work that should wrap up before Thanksgiving.
The bottom line: we're still on target for a late Spring 2018 completion of entire project.
Posted by TxDOTSanAntonio at 4:00 PM
Email ThisBlogThis!Share to TwitterShare to FacebookShare to Pinterest
Newer Post Older Post Home