Hey, y'all. TxDOT Public Information Officer Josh Donat here. I wanted to offer a personal message in today's post.
This morning a large number of vehicles were involved in collisions along northbound I-37 between Hwy 181 and I-410. Most of these collisions were attributed to dense fog - something we don't deal with too often in this part of Texas.
Well, I grew up in the Pacific Northwest, just a bit northeast of Seattle. Fog was a near-daily part of the morning commute out there. Heck, some days the fog got to be downright beautiful, when you'd get elevated above the fog line in the morning. The beauty of a foggy PacNW aside, it made for a challenge during our commutes. Sometimes those challenges could prove deadly - claiming the life of a schoolmate of mine when I was in middle school.
Because of these challenges we were taught thoroughly how to best drive through fog - particularly when we had those mornings visibility was limited to a few hundred feet at best. Because I care about the drivers here in San Antonio (and the great state of Texas as a whole), I wanted to take a moment to share with you the things I learned way back when I was in drivers' education classes as a teen: 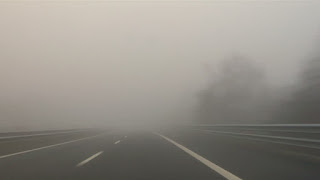 That's it. Driving in these adverse conditions - when necessary - can be safely done if you follow these basic rules. Of course, if you feel like it's unsafe don't hesitate to just stay home. The good news here is the sun comes up and burns that fog away really fast. For me, growing up in the foothills of the mighty Cascade Mountains, that fog could sit where it was until almost noon. That's not the case here. If it's super foggy out, your best bet is to just wait it out and head in to wherever you're going a few minutes later.
If that's not an option, though, follow these tips. They'll get you through.
Posted by TxDOTSanAntonio at 1:58 PM
Email ThisBlogThis!Share to TwitterShare to FacebookShare to Pinterest
Newer Post Older Post Home