I live in Rogers Ranch, and we see construction signs posted on Rogers Ranch Parkway for work on the intersection with 1604. Can you tell us what will be done there? We hope it will add turnaround lanes.
- Michael
Michael, we had several of your neighbors reach out on this. Perhaps you've already gotten word ... but if not, please spread the word now.
We've got a simple overlay project going on between Rogers Ranch Pkwy and Bandera Road. That means we'll be shaving off the top 2 inches or so of asphalt and replacing it with a fresh layer of asphalt. Work on the main lanes is overnight only - that stuff won't happen until we get back to warmer temperatures. During the daytime we're allowing the contractor to move forward with the frontage roads.
All told, you'll see us doing this work for the next nine months.
No turnaround lanes are coming ... yet. We do have a future project adding turnarounds, but we're about two years from seeking bids on that one. Sorry it's not sooner.

Just a quick observation on the I-10 east at 1516 frontage road conversion to one-way. Converting the frontage roads to one-way before the 1516 intersection improvements was a horrible idea and potentially more unsafe than two-way. There is lots and lots of traffic from the landfill and other businesses along the southern frontage road between Foster and FM 1516 that now has to travel east to the four-way stop at 1516. This has the frontage road extremely backed up. The exit ramp to 1516 is also backed up onto the highway causing an extremely unsafe condition of waiting to exit on the shoulder with traffic passing inches away at 70-plus miles per hour. It might be a good idea to get started on the 1516 intersection improvements soon!
- Marshall
Turnarounds at FM 1516 and Loop 1604 are not happening until a future project; those are not included in this project. That goes for the traffic signals at FM 1516 as well.
You'll see some improvement when the intersection at Woodlake Parkway is finished in 2018, and Texas Sterling Construction is working to build up the inside halves of the frontage roads so they can also build the new exit and entrance ramps. Both of these will help quite a bit.
Ultimately the decision to fast-track the conversion of frontage roads was made by our area engineer, who felt strongly this would improve safety by eliminating early the two-way frontage roads.

Why does TXDOT San Antonio keep listing Schertz as Selma in your weekly construction-related closures? Confusing.
- Concerned Citizen
We'd like to blame a map that's not incredibly clear on boundaries: 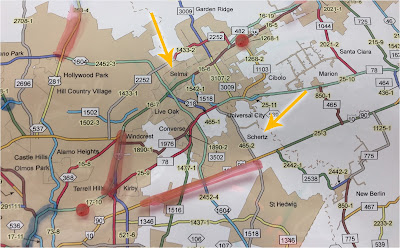 We drove through I-35 over the weekend to verify city limits and checked with our stakeholder lists, and found Selma isn't really involved here. We apologize for the error and any confusion it's brought - we should have verified this long ago. We have adjusted the most recent closures post to reflect the correction.

There have been a lot of crashes along I-10 between Boerne and 1604 since the recent construction projects. Is the traffic behaving as modeled? Should we anticipate further construction progress due to the continued development in the area?
- Rob
Any time a crash happens you can probably bet traffic isn't behaving as modeled.
We're not seeing a statistical spike in crashes along the I-10 corridor right now, but these crashes are typically more dramatic when a project is active.
As for continued development ... yes! We have a few major jobs still on their way over the next five years:
Just to give you an idea.


What is going on with Military Drive West? We're currently on "traffic switch" number 2 but there is a new sign advising of a traffic switch on 18-18-17 - I assume that's supposed to be 10-18-17? Does this mean the traffic direction is going back to normal for now or are we going to be going sideways while driving backwards?
- Kim 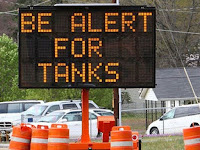 Apologies for the typo in the digital message board. Those happen from time to time and we do our best to catch the issues quickly.
Where we know and have published several stages of traffic shifts, a generic "traffic switch" message on a board should alert folks to the next phase happening.
More to the point at this location: we will have the left turn lanes opened up in about a month (by time we reached the 18th we had traffic all where it started, except those turn lanes) with fresh striping to keep everyone in their lane. That will only last about 6-8 months, though, as we'll be ready to move traffic over onto the frontage road at that spot summer 2018.

I don't have a question....just a comment! I think you should KEEP the New Braunfels Avenue Bridge the way it is with the wonky arches.....it's one of a kind and a funny story!!!!
- Marci
We're glad you appreciated the story out there and are able to find some humor in it. We're still not going to keep the wonky arches. As we explained in our post the arches will be re-done once the remainder of the bridge is built and we can move traffic away from the edge there.

On the La Cantera Pkwy to Ralph Fair Rd project, I thought the work is only done on the inside lanes. Why are barriers being set on the outside as well? Also what is being done to the drain structure when going westbound right before Ralph Fair Rd light on Leon Creek? I thought that was done during the previous project?
- Danko
Let's start with the building one side and the other thing.
We're building on both sides of the road - first to the inside, then to the outside. In order to make room to fully build the new HOV lanes on the inside of the current main lanes, we're adding some "temporary" pavement to the outside. This will allow us to shift traffic over just a few feet so we can really get going on that inside lane.
As for the drain structure work that seems to be redone, we're not really re-doing any work done by Texas Sterling Construction in the previous project. Here we've got box culverts running under the main lanes of I-10 that need to be extended for the additional width of the highway.
Posted by TxDOTSanAntonio at 2:48 PM
Email ThisBlogThis!Share to TwitterShare to FacebookShare to Pinterest
Newer Post Older Post Home