If you follow our blog regularly, you're likely used to hearing from us about construction on the US 281 Expansion Project.

Until now, most of the news out of that project has focused on Phase I, which started in 2017 and which goes from Loop 1604 to Stone Oak Parkway. There's definitely still lots of activity in that stretch, but those of you who frequently travel further north have likely noticed an uptick in work up there as well.

That's part of Phase II, which started this Spring and it picks up construction from Stone Oak Parkway up until the Bexar/Comal county line.

Thus far that project hasn't had much impact on the traveling public because work has focused on building the new southbound frontage road with minimal needed closures. If you live in or near Wilderness Oak, you likely noticed a discernible change on that street off the highway. It's what we typically call a "traffic switch," whereby drivers are diverted to one side of the road so crews can work on the closed-off portion.

The point is to ensure the highest safety both for crews working behind barrier as well as the traveling public. Here are more details about this switch (see map for visual detail: 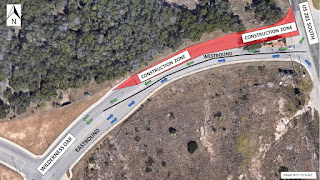 • Before: Wilderness Oak was divided by a median, two eastbound lanes and two lanes at US 281.

• Currently: Wilderness Oak westbound lanes are closed off and shifted south of the median, so traffic will now be two-way undivided flow (one eastbound lane and one westbound lane).

Our contractor has placed electronic message boards along southbound US 281 prior to Wilderness Oak indicating “New Traffic Pattern” and on eastbound Wilderness Oak: "Two Way Traffic Ahead/ Stay Right."

The project is progressing well. Once the contractor finishes the new southbound frontage road, the next phase will be construction of the new northbound frontage road. Then, crews will move to the middle for the expansion of the mainlanes. which will keep two general purpose lanes plus one new HOV (High Occupancy Vehicle) lane in each direction.